After ten years have past since the launch of the famous iPad tablet we take a look back through history and ask ourselves: Is the tablet ready to serve as a replacement for our desktop? We rant about the pro’s and cons of android vs IOS and how Microsoft came close to the holy grail. Topped of with some fancy tunes from ScannTec its another show from the Knightwise.com bunker.

In the second part of “Lockdown Lifestyle” we focus on filtering the information coming your way via Social Media and being aware of the “reality distortion field”. We train you to help tech organize your day and talk about the goals you want to set for yourself.

We are back (from the dead?) with a new show talking about the impact of “working from home” during the lockdown. In part 1 of a two-part episode we talk about how to use technology to enhance your digital (and analogue) lifestyle during the lockdown. How do you use tech to separate Work/Life/Play and stay sane during crazy times.

The Discord roundtable is back again this week with the perennial discussion among technology and open source enthusiasts – Will we ever see the year of the Linux Desktop? 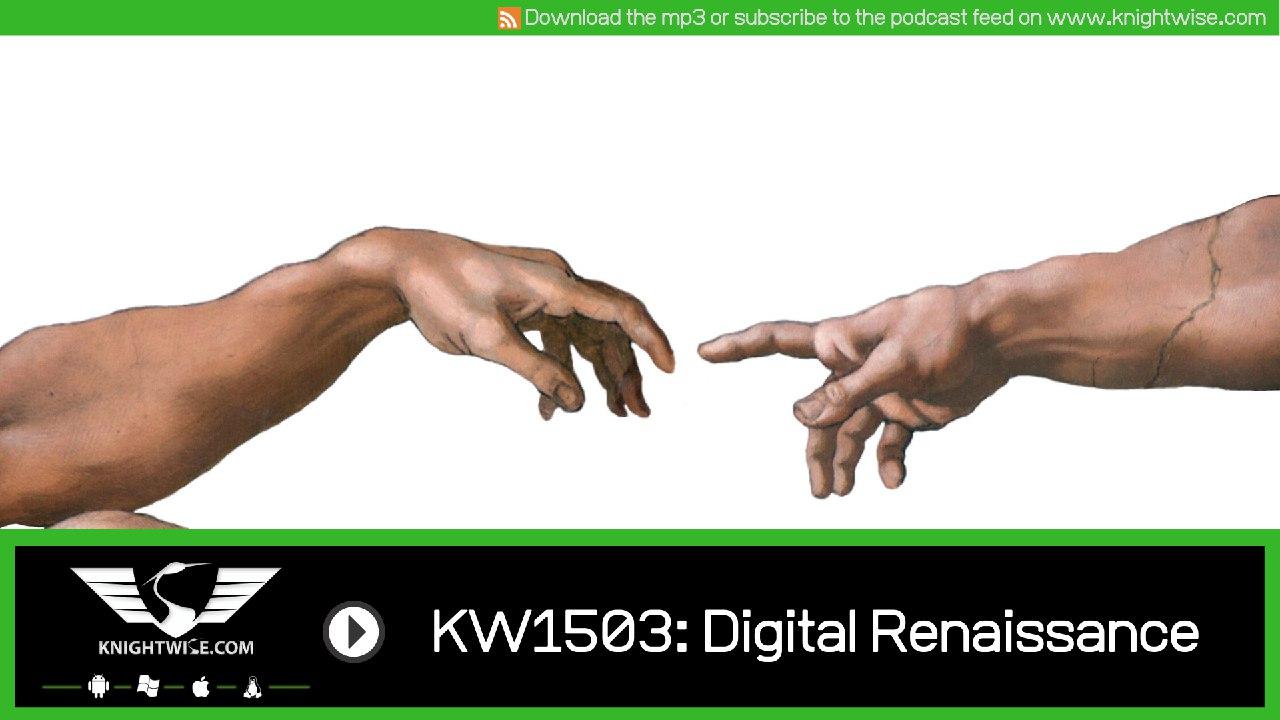 Your ears do not deceive you, in this time of social distancing and zoom-based happy hours, the members of the knightwise.com discord bring you a roundtable of geeky goodness.

Its been a while since I blogged. Hell, its been a while since I did anything of great importance for Knightwise.com. And for that i want to apologize. I could blame the usual scapegoat of not having enough time, and in part that is true. But only in part. The other half was a lack of effort that stemmed from a single thought: Why bother ?

Pretty harsh words because at the source of that thought lies that once thing I was lacking. That sole thing podcasters and content creators crave whenever they put something out on the interwebs: Feedback. The lack of steady shows coming out and the “dispersion” of the community over multiple Social Media platforms (The die-hards on Telegram, some on Facebook, hardly any on Twitter and none on the blog) did make podcasting feel like shouting into the void. That taxes your motivation, decreases your show output and .. fewer shows, less feedback etc.

With the Covid19 crisis breaking out across the globe that changed. Suddenly I had a more “stable” workroutine (I work from home full time now) and many of the die-hard wiseguys were online during my office hours. That sparked some contacts, conversation and .. some ideas.

It was Wiseguy (lets call the core team that) Regravity that came up with Discord. True enough, producer KDMurray had already suggested it a while ago but as an alternative to Telegram it never “went” anywhere. That was until we started talking about the “open mic” voicechat hotline the guys over at HPR have. As the digital version of a 90’s partyline you can “call in” to their mumble server and chat. Kind of like “office banter” but you aren’t at work and they are not your colleagues.

We tried it out together with Konrad, Gerjon, KD and Regravity and pretty soon we were having a cosy chat. Of course.. give a podcaster a microphone and he has a stage, so pretty soon the idea bubbled up, why not DO a show this way? Recordbot Craig was added to the list, everyone dusted off his USB microphone and we set a time in my busy schedule to actually record a show.

The result was great! Having multiple hosts in the room bantering over a subject gave me back the feelings I had back in the days of the Global Geek Podcast, a sense of camaraderie and sharing the (chat)room with a people who are a lot smarter then I was, enriching the show.

Slowly but surely we started experimenting with other functionalities of the platform. After (accidently) broadcasting the sounds of our living room while having diner and watching ‘Friends’ the idea popped up: What if we could use this as place not only for recording, but also for broadcasting? So this sunday we gave it a try and did a (closed) livestream of a DJ set for the community. Channels were added where you can share what you are watching, what you are reading and more. The sense of “community” started to grow.

Before I tell you about todays monumental apex, I want to say WHY I start to love Discord as opposed to Facebook and other Social Media. ONE: its pure geek. As a pumped up spiced up version of IRC, it gives us a LOT of sharing and collaboration abilities, while still staying true to the roots of a classic “chatroom” where you are represented by your Avatar and your handle and NOT by who you ‘actually’ are. You can come in and show us your geek side, and nothing else. Its chaotic, its technical, its fun. I can (finally) ditch my ‘real’ name and embrace the Knightwise persona once again.

However, while hanging out today we decided that it was time to embrace discord in full by trying to get as many members on board from the community as we could. I started pumping out Facebook PM’s, shared posts on the Facebook Community and started trolling long forgotten ‘follow’ lists on twitter with one message: We are rebooting the community, come to Discord. In a few hours time something amazing happened. Like a scene from a movie where the different retired members walk in one by one to once again form a fantastic rock band, they came. Dave, Herne, Thorgal, Peter… voices and friends from long gone walked in and .. started to chat.

I want to say something that might sound cheesy, but I think I had a moment of pure joy seeing everybody walk in that way. It was amazing to see a community coming back together and exchanging banter and quips. It made me realize that the one thing what was keeping me from doing shows was not an audience or feedback, it was a community!

I remember @moonenmoonen’s wise words years ago: It’s not about the SIZE of your community/listeners, its about the interaction you have with them. And its great to see everybody coming together again on a platform where we can pull in their knowledge and interactions and put them into a show with hardly any effort. Its like .. technology working for us instead of the other way around.

You can find our Discord at: https://discord.gg/w3ZG9WM

This week producer KD join’s Knightwise to talk about resolutions (or not), goal setting (or not) and setting up some guiding lights for your year with annual themes.

Welcome to 2020!
This week Knightwise takes us through a list of projects to help stretch our geek muscles and maybe try out some new ways to use or think about technology as we slide into the new decade. We’ve got, things to learn, ways to protect your privacy and your data, projects to try and services you might want to support.

Connect with the Community

This week on the podcast Knightwise is back in the car as he dives into the philosophical side of creativity with some thoughts on how to get from wanting to create, to having done some creating.