Iphoto is a great application. It organises your pictures, lets you tag people, add geotags and use tons of effects and sliders to make you aunt Joe look like the witch from the Wizard of Ozz. iPhoto is also good at something else : keeping your photos … in iPhoto. All cool and dandy until you want to access them from a machine .. that isn’t a Mac. iPhoto (just like iTunes) are proprietary applications that lock in your data into their database/filestructure. That’s cool if it helps them do their thing .. but what if you want more “freedom ?” 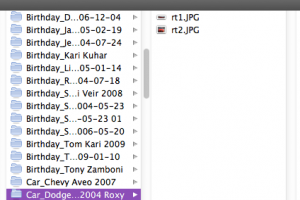 So lets spring your data.

But where are you going to put them ?  That’s a good question. My philosophy here is that your data should be freely accessible by multiple operating systems, from multiple locations and multiple applications. This makes the obvious solution an organised file structure using files and folders on a network share.

What do you have to loose ?

You can loose some of that ‘extra data’ some applications add to files. iPhoto writes metadata like face recognition data and other tags in a different location (so not INSIDE the picture information) So you might end up loosing some of that data. It might be a price that is too high to pay to set your data free.

What do I use to export ?

The name of the application we suggest (for OSX of course) is not very original : “iPhoto export all events” does what it says it does. It takes your iPhoto library and exports the pictures in a folder structure based on your different events. There are 2 versions of the application (one where the folder structure is based on the names of your events the other one where it adds the event date in front of the folder name )  Its an older app, its free .. but it works.

Your pictures are free ! Yeey ! Time to go looking for a photo management application that does NOT try to slobber up all your files in one giant database. We will probably get into a cross-platform friendly list in a later post so in the meantime … stay sharp !

You’ve heard us talk lots of times about Virtualbox. Our FAVORITE free (as in ‘Gratis’) cross platform virtualisation software. As we mentioned in the previous podcast episode about “Proxmox” (a more serious virtualisation tool) the machines in our home with their I5 and i7 processors and “Gigglebytes” of ram .. are mostly idling around in a corner when you’re not playing Call of Duty (and perhaps you even do THAT on the Xbox) So lets give those machines something to DO ! Running a ‘dedicated’ solution like dropbox might just be a little too much, but perhaps you have some cycles to spare on another system that is also being used as a desktop ? Why not try Virtualbox.

As an example : Currently I have dragged my I7, 16 gigabyte’s of ram Mac Mini downstairs and hooked it up to our tv. Since it carries most of our media it was a little silly to have it running in my upstairs office and having to stream everything back to the TV using a second (front end) box. So now the little bugger sits in our media cabinet with some 4 terrabyte of USB Harddisks hooked up to it. Having it just sit there running OSX and acting as a mediaserver or fileserver was a waste of power and cpu cycles. So with virtualbox I gave it something to do. I installed Virtualbox, hooked up a big external usb drive and started cooking some VM’s.

In the end, controlling these virtual machines is a little messy sometimes. I mean you can’t just interrupt @Niejana when she is watching “Blood and Chrome” to say : Sorry about that, I need to mess with something on my Virtualbox and for that I need to use the TV ?   You need ‘remote’ ways to manage that virtual machine situation.

And with those little tips you know can turn that headless box OR that powerful machine upstairs that is always on, but sometimes used by your kids for gaming… into your own personal datacenter. Don’t have the spare beige box for Proxmox ? Just have a desktop and want to get it to do some cool things ‘under the hood’. Want your own invisible datacenter ?  Here you go ! Download Virtualbox NOW.

In this episode we give you some ideas and possibilities when it comes to building your own home Linux server. While putting an old clunker back to good use or using a VM, we give you tips and tricks on using the command line, CLI applications, web based interfaces remote desktop sessions or even terminal servers. Let technology work for you and build your own home linux server with this podcast as your loyal companion.