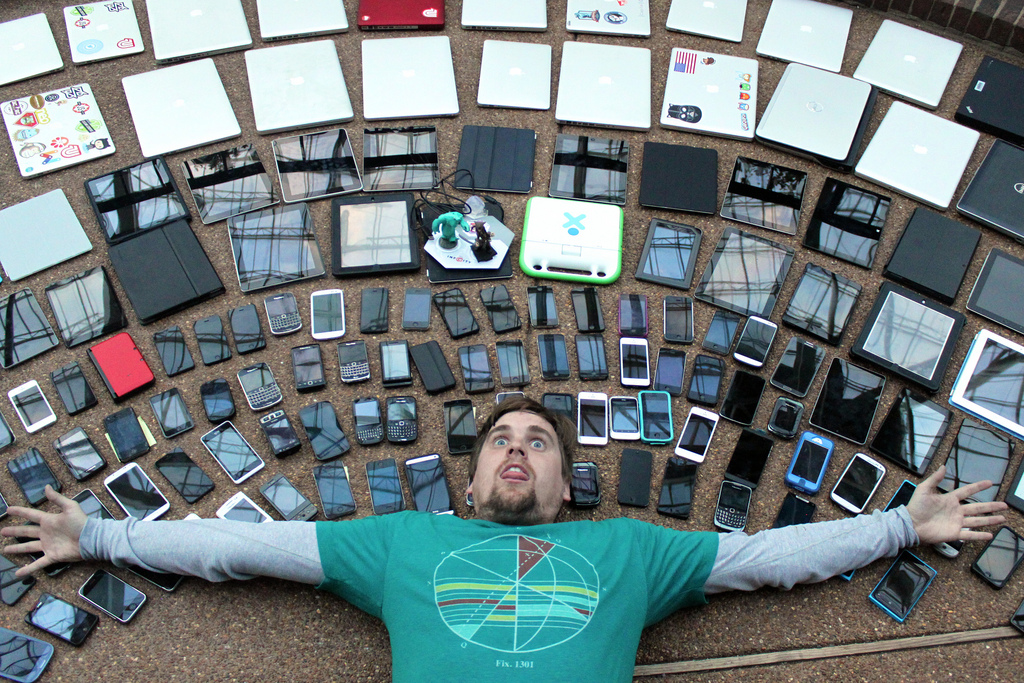 How About “Just” the iPad?

Whenever I have been pack my bag for my morning commute I get annoyed with the sheer redundancy of the stuff I take with me. Here I am packing not one, but three or four “computer capable” devices into a bag to haul off to some office somewhere.

Not only am I carrying around more devices then I could possibly operate at one time, the software on these devices is redundant as well. For some reason I cannot fathom I have 3 different versions of Microsoft Word on my person. One on my PC, One on my smartphone and one on my tablet. It is possible to dream up a situation in which I might be required to use said trifecta of Microsoft’s favorite text-blender simultaneously… but that would involve an alien invasion and myself in the unlikely role of the geek that saves the world with a bulleted list.

So why do we (still) cling to this redundancy? The answer is simple: because it feels safe. After 7 years in the tablet era we still have not come to “trust” these devices in a way we trust our beloved PC’s (which by now are seriously starting to mimmic our tablets in both appearance and behavior). God knows its not because the tablet apps are by some means sub-standard or don’t offer what we need. The one major hurdle the tablet haters could never get over was the lack of an ‘actual’ filesystem on iOS or Android. Sandboxed applications drove them insane. Yet what do we see today? PC based operating systems are – out of sheer self-preservation – starting to move in a very similar direction. Windows 10 supports installation of unified apps from its app store (in essence a sandbox) and Linux is embracing a more contained approach to applications with their container-oriented Snap packages. With the average smartphone having enough RAM and CPU power to put a PC from 2013 to shame and even the most low-end tablet having a screen resolution that matches the TV in the living room, technical shortcomings are no excuse either. Then what is it that turns us into digital packrats?

The real answer is in the fact that we only think we are carrying around redundant devices because we make them redundant.

Somehow with the overabundant availability of identical software on different devices we have started to think that we have to click on “install” everywhere. No wonder it feels redundant.

Specialization is the Key

If we truly where to look at the real strength of each device, we would figure out what do do where pretty quickly. Short messages and communication? Phone. Watching video’s on the go or browsing through news articles while sitting on the train? Tablet. Full blown posture friendly photo editing? PC/Laptop.

You see? No more redundancy. Instead you have a sense that your devices are complementary, depending on the task you do and the situation you are in.

Don’t do a 3000 piece jigsaw puzzle with chopsticks. Don’t use a lawnmower to trim your nails. Stay away from the firehose when you want to water that delicate orchid in the living room. Each device has its use, its purpose and its strength (just like you btw). So remember that next time you feel tempted to install Powerpoint on your smartphone: (to quote commander Scott in Star Trek V) “Use the right tool for the right job!” So ask yourself: “is this really the right device for the job? And if it’s not, do it somewhere else.