The thing with proprietary software solutions, is that they are great. Everything tends to work smoothly together right up to the point where you decide to wander off the beaten path of supplier XYZ. A couple of years ago I made the crucial mistake of pouring my entire music collection into iTunes. Now, some 10 000 songs later .. its still in there. Being totally OCD I have organized all my tracks into nice little playlists and enjoy my tunes in the “Apple walled garden”.  Whether I am playing them from the Mac, sharing out the iTunes library over iTunes to my other macs, blasting them from the Airport express speakers or syncing them to my other i-Devices. 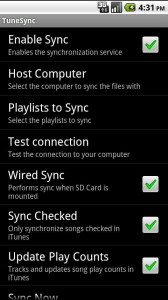 But a couple of weeks ago I could not help myself myself and crawled over the walled garden into android territory with my purchase of a Galaxy Note 2. And accessing my delicately curated iTunes library from THIS device turns out to be an near impossible task. The deep crevasse that divides me from listening to my tunes on my “droid” consists of an incompatibility to sync with iTunes (only IOS devices of course) and the total inability to get the music on my Android in an organised form. Sure I can browse the filestructure of my iTunes library and copy over files to the SD card on my Phone .. but iTunes has “reorganized” my music into folders according to artist .. not according to playlist.

Tunesync detected my (massive) iTunes library and started indexing the playlists right away. After I selected the playlists I wanted to have on my Android it started to copy over the tracks AND the playlist order in my Androids music collection. 20 minutes later I had all the grooves I needed on my Note2. Tunesync regularly “checks” if the playlists are still up to date and “updates” them whenever I connect or start up the app.  I had expected some glitches and on one occasion Tunesync had given me all my playlists .. with no tracks inside ( it erases and re-copies all the  tracks on every sync instead of doing an incremental) but when I retried the sync it worked flawlessly.

Tunesync does one thing and it does it well, and the hilarious part is , it does it better then Apples iTunes-IOS wireless sync ! The app is 4.99 in the Play store and worth every dime.

Tunesync is available from the Play Store.