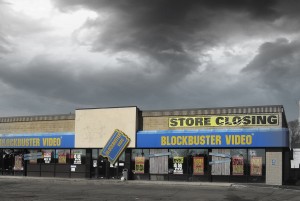 If there is a place in the universe farthest away from the pinnacle of socio-technological evolution, then it must be the town I live in. As proud as it may be to hold the title ‘Belgiums oldest city’, its inhabitants tend to hold on to ancient times (technologically) instead of rolling around on Segways, while steering their quad-copters form their cellphones. I would not dare to go as far as to call this a digital ‘backwater’ town … but instead let the anecdote speak for itself.

This week marked a dark chapter in this towns history as the last DVD rental ‘entertainment store’ went out of business. This behemoth of ancient times has finally fallen under the crushing weight of pay-per-view services offered by Belgium’s 2 major ISP’s. Perhaps bit-torrent also had something to do with it but … in this town that impact must have been pretty moderate. As we walked by the empty storefront I watched in amazement as a car pulled up and out hopped a 30 something soccer-mom, cradling a collection of dvd’s in her hands. She walked up to the store (That was now completely and utterly empty) and started rattling the door. She looked around in confusion and peered through the windows trying to see any kind of movement. Since I’m horrible at observing people unnoticed, the caught me staring at her. “Its Closed !” she pointed out. Before I aptly wanted to congratulate her at pointing out the painfully obvious she stuck out her precious DVD collection. “I have to return these !” she said helplessly, (as if I was going to be her knight in shining armor ). “Well, you are in luck, I said” The store closed up this weekend, so you can get to keep those dvd’s. What I expected to get was a response like “Damn ! Lucky me then .. too bad about the store”, followed by an unlikely but possible Obama Style fist bump from a curvy mom of three .. but that didn’t happen. Instead there was this look of utter desperation as she babbled “Then where am I gonna rent my dvd’s ?”. Now this is a valid question you might pose to any Noob or lamen .. but asking ME where to ‘Rent DVD’s’ is like asking a professor in theoretical quantum particle theory how you can “milk your own cow”. Was she kidding ? My suggestions of “Renting stuff online” ( I didn’t even get started on ‘downloading’) did not give her any solace either. And the fact that one of the DVD’s she had in her hands was a copy of the FIRST ‘Bridget Jones diary’ made me realize this person was not very culturaly savvy either. The kind of person who still thinks ’50 shades’ is to be considered hardcore porn. Fact of the matter is : This person was a techno troglodyte. Somebody for whome the fast moving pace of our digital age is something that does not quite come up on their radar. I saw her grabbing her phone (A cheap flip phone) and contacting the troglodyte main cave to report in that their oracle of visual entertainment had just gone dark. The non-productive conversation with the mouth-breathing consort did not bring any solutions either so .. for a split second I saw her think about “just leaving the dvd’s at the door”. Then a splinter of common sense (or social awkwardness) resulted in her tossing the dvd’s back in the car, shrugging at me .. and driving back to the land where people still buy books on paper, record shows on VHS, buy a full cd because they like one single track, read porn from magazines and rent DVD’s in store.

Oh bless you digital troglodytes, for whom the painfully persistent pace of progress still seems to be nothing more then a slow trod. For you are the last hope of the record shops, the TV-repair men, the stores that sell you a mega expensive cover for your smartphone because you don’t know about this thing called ebay. I tip my hat to you as you actually believe the stuff about your mobile phone plan the guy in the store is trying to tell you. I cringe as you click the banner on some random webpage that says your computer is infected and you need to fix it NOW. I bid you a safe journey as you go shopping for your new computer in a place that also sells washing machines. And yes, I sometimes even want to pummel your face with a blueberry muffin as you ask me if I can “Make phone calls” with my iPad, you still are adorable. Adorable .. techno troglodytes… So as I twist and turn in bed, thoughts of the NSA sniffing the internet keeping me awake. As I ponder the question what will happen to the internet if the DNS servers ever go down due to a massive DOS attack. As I spend hours comparing specs about the new intel CPU’s for my next gadget … I wonder about the simple life in your cave .. perhaps old school isn’t that bad after all. DO you have Wifi over there ? Probably not yet.