It’s Guestblogger week on Knightwise.com where we have our community members give you their best hacks tips and tweaks for cross platform geeks. Today we are very happy to announce guestblogger Kevin who does a magnificent writeup on the state of Apple AND how to “slide” down from your iCloud into the land of Android WITHOUT losing any functionality. If you want to have one foot in the walled garden of Apple, but still want to bite into the Android ‘apple’ … Read on !

Kevin from Connecticut has been providing computer consulting services to residential and small business users for 15+ years.   He blogs about tech at TheAcronym.com.

As Apple Slips From Perfection,  Don’t Fear Trying Android : Connecting your Android to the Icloud. by Kevin from Connecticut

I’m sick of tech purists.  Too often people adhere to brands or categories like they are members of an irrational cult.  In a recent article Walt Mossberg referred to the Mac cult, the Windows cult, and the open source cult among others.  Why don’t we just say — use the best tech you can, within your budget, that truly meets your needs or helps you reach the goal you are seeking.  I belong to a  MUG (Mac User Group) and have been a member for 10 years.  There is a lot less Mac extremism these days than when I first started.  However, in the pre-iPhone days many members loved to use a Palm Treo  because Palm’s Desktop program synced so well with OS X.   Once the iPhone and iPad rolled out, Mac fanatics thought they had hit the trifecta with the perfect computer, phone, and tablet.

Four years later, I think many Mac owners are freeing themselves from the bondage of feeling like they must use all Apple devices.  Having primarily been a Mac users for the past 10 years (and just recently changing to Windows), using an iPhone 5c as my phone and having owned an iPad I would say that the closest Apple comes to perfection is with their tablets.  When I bought my first Mac in 2004, a PowerBook 15,  Mactinosh was an enthusiast brand.  The Mac user base was a lot smaller.  Being part of a community  meant something.  Macs sported some of the best tech, a blossoming OS, and were serviceable.  Given recent executive hires from Yves Saint Laurent and Burberry, Apple is really shifting from being an enthusiast brand to becoming a boutique brand.  RAM is not serviceable on any of the 2013 model MacBooks.  The SSDs can be swapped out but do not use the industry standard, 2.5” form factor.  The iMac isn’t serviceable at all and the MacPro is expensive and playing hard to get.  Truth be told, the soon-to-be-gone 13 inch non-Retina MacBook Pro along with the Mac Mini are the only two models that I can passionately recommend.  They represent the spirit of the Mac brand as I knew it 10 years ago.  I never bought into the “Apple Tax Theory”.   You can easily drop $1400 on a great Windows laptop these days.  However, with Apple making its computers less serviceable, and driving out independent Mac sellers / repair shops, you may have to wait several days (even up to a week) to get your Mac repaired by them.   Therefore, you really need two Macs.  Enjoy your tax! 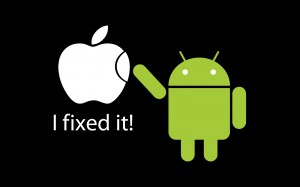 There is no shame in being a Mac user and toting an Android phone. The iPhone 5 and 5c are still only 4 inches.   Clearly the sweet spot among all other phones out there is 4.7 to 5 inches.   Think Moto X, HTC One, Nexus 5, Galaxy S4.   People want more room to type, more width, and more height when their phone is in landscape mode.  The iPhone needed a growth spurt last fall and there was no change.  On an episode of the Your Mac Life Show podcast prior to the release of the iPhone 4s, Mac pundit Jim Dalrymple infamously said — “Apple could keep the iPhone the same, drop it in shit and sell it as ‘the new iPhone’ and people would still flock to it by the millions.”   First of all,  I think that’s really insulting to think that iPhone customers are that naive and will always be blindly loyal to Apple.  Furthermore, Jim’s statement was a self-fulfilling prophecy for Apple.   The iPhone 5s is essentially a retread, dipped in crap, and sold with a new name.   The faecal coating on this phone is iOS  up until 7.0.4, the current (non-China) version of as of the publication of this post.

Enthusiast Mac owners are clamouring for something more with their phones.  They want to access the file system and a folder structure – something available with any decent Android phone.   Without a doubt, the Android OS is better for people who want as many communication options at their finger tips as possible.   In IOS you might be able to share from one app to 3 or 4 different apps at most.   With Android, you can take a photo or a news reader article and share this to all 10 of your messaging apps, all three of your e-mail clients, and many other apps.  Android does not try to restrict what you can share between apps.  Just make sure that these are safe apps!    However, the Mac user has an attachment to iCloud and its e-mail, contacts, and calendar offering.

You needn’t feel like you have to convert all three of these services over to Google, though you will probably want to create a Google account when you get your Android device for the purpose of downloading apps from the Play Store   You don’t have to use the associated Gmail account as your primary e-mail address.

You can set this up in the Mail or E-Mail app on your Android device.  This is NOT the Gmail app.   If you don’t like the stock E-Mail app on your device, please download K9 (free) in the Play Store.   https://play.google.com/store/apps/details?id=com.fsck.k9

Instructions for configuring your iCloud mail in any 3rd party client can be found here https://support.apple.com/kb/ht4864

The developer Marten Gajda has created two virtually flawless apps and he is very responsive to users’ concerns.

Should be running an Android 4.1 Jelly Bean device, you may need to install the (free) workaround apps that he created for you.

There have been instances of apps logged into non-Google accounts losing their saved logins upon a device reboot.

The Smooth Sync apps, offer incredible value at a combined cost of under $8 US, and allow Mac users to to experience the joys of Android without giving up their trusted iCloud services.

Links : You can find more of Kevin’s great work over at The Acronym Online.