I’m not a gamer. There, I said it. Contrary to the beliefs of many that geeks tend to spend hours and hours online playing all kinds of cool games .. I form the exception to that very rule. Whenever you watch episodes of the Big Bang Theory or some other big media production that tries to depict “What a geek is” to the average digital mouth breather, it always encompasses images of Computers, Terminal windows and hours of Console gaming. I am horribly bad at the latter. 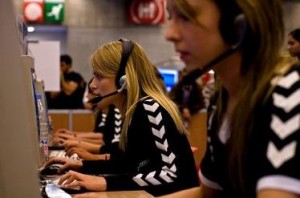 I am just not a “Console” Gamer. My gaming career (can you call it that ?) did start on “Console Gaming”. That is, if you can call the Atari 2600, its 8bit graphics and its indestructible controllers a “console”. Compared to todays Xbox 360 consoles that try to do everything but wash your dishes, the Atari was horribly yet brilliantly simple. Plop in casette, play game. We never had to worry about remembering our “live-id”, logging in, an internet connection, checking if our TV screen was DRM compatible for HDMI output and so forth. The only thing you DID have to remember was to finish up in time for your dad to watch the news. (Because you played this baby on the family tv, remember ?) The controller was horribly simple : A stick to move, buttons to fire/jump… that was it. If I ever thought this console would have prepared me for gaming in the 21st century .. I was dead wrong. I never stood a chance.

So after spending my digital adolescence on PC gaming using the powers of a noisy Cherry keyboard and a Logitech mouse, I stopped gaming for a couple of years. Getting a Mac meant that I had lots of new things to keep me occupied like producing music, video’s and podcasts. There weren’t a lot of games on the Mac in the beginning, and I never realy cared about that. But as for filling as it was to create a podcast, there was still this nagging sense of urgency that somewhere, somehow, I felt the need to let off some steam by blowing up a random zombie with a big gun.
So instead of installing games on my computer (I despised the hassle) , I decided to “just get a console” for my gaming needs. I was going to get BACK into GAMING.

I tried valiantly to throw myself back into the land of the modern gamer and got me an Xbox 360. The cultural shock could not have been any harsher then when I dipped my very first toes into a level of Halo. But before we get into the horrible embarrassing story of me being fragged by a six year old, lets back up to my initial encounter with the Xbox. When I got the unit out of its box and hooked it up to our TV, I somehow KNEW it was going to be a little more complex then my Atari 2600. It needed an internet connection : I expected that. It needed to run its updates : I expected that too (It IS a Microsoft product) It required me to set up an account : Ok, lets do that. But when I started asking me questions like : What kind of hair do you want to choose for my Avatar and “would you like to buy more accessories online” I was starting to feel a little out of my depth. Was this the state of gaming today ? No ” slide in the cartridge, flip switch, kill space invaders ” but a tedious process of digital bureaucracy and pointless avatar-pimping ? Come on !
I waded through the process, only to be appalled by the fact that I needed to pay EXTRA to play my game online. A game that I had already purchased. Baffled by the paywall between me and what seems to be a very “basic” need to ‘play with others’, I chose to go for “single player mode” first.

Halo. I had seen kids play this and was amazed at how good the game looked, how versatile it was, how detailed and entertaining it looked.. This was going to be fun right ? Wrong ! It turned out that the modern day gaming industry had slid yet another insolvable Rubics cube between me and my game : The controller. Forget the simplicity of the Classic Atari controller. This thing had more buttons then I had fingers. It had knobs, dials, buttons, switches whose purpose was completely lost on me. What WAS this ?
Add a giant Tv, a high speed game with tons of bad guys, sounds, flashing lights and a 300 button controller … and I was lost. I spent most of my time in Halo as organic paste on the wall before I switched to call of duty. Here, I was even worse. In the heat of the fight I forgot what button was up or down (or fire) and ended up giving the bad guy my rations. (He did not appreciate the gesture). I thought a racing game would be better but ended up plowing fields with my very expensive Ferrari in Need for Speed. I just wasn’t any good at it.

The controller and all its buttons had me baffled. The fast pace and high details of the game overloading my sensory pallet. My lethal gaming skills were reduced to a puddle of goo in the land of modern console gaming : I sucked at it.. Big time.
So after spraining a muscle while playing ‘The Michael Jackson experience’ ( I thought the Kinect controller would be ‘a big help’ in all this) I decided to sell my Xbox. Its now on the Belgian version of Craigslist. Not because its not awesome (because it is) not because its too hard (its not) but because the generational gap between me and the modern day console gamers is too big for me to breach.
I’m a classic gamer. Meet me in the online world of Counter Strike, of Quake 3, of Wolfenstein or some other first person shooter .. and I am lethal. Armed with a clunky keyboard and a sensitive mouse, I will seek you out and I will be the soul progenitor of your continues respawns. I’m not old .. I’m just Retro.