The house was pretty packed yesterday in London for Samsungs ‘Ativ premiere 2013’ event. Press, partners and people from Samsung from all parts of the globe milled around in a mostly darkened hall, patiently anticipating the new product releases the  company was about to give from its giant stage that was to be the focus of tonights events. 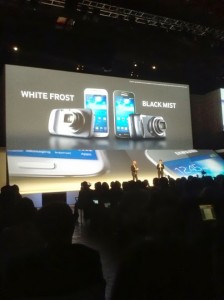 To be honest : We did wonder what the fuss was all about. Earlier this week Samsung had already leaked the specs of its “Galaxy Zoom” : Its recent addition to the Galaxy Smartphone line that was probably invented by the Hulk himself. In his unstoppable urge  ‘Hulk-Smash’ everything together, the Galaxy Zoom was born after they gave the green monster an S4 in one hand and a point & shoot in the other. When the green guy got the order to “Smash” them together, the Galaxy Zoom was born.  In short : An S4 with an actual optical zoom.  Future owners of this device who want to carry this in their pockets might get the line ” Is that an S4 Zoom in your pocket or are you really really happy to see me ? ”  Where the S4 Zoom “should” be a phone that feels like a point and shoot, the ‘other’ Hulk-Smash experiment leaves no room for interpretation. The Samsung Galaxy NX is a powerful DSLR (with interchangeable lenses) tied to an Android OS and a 4G connection. For those paparazzi who want to snap up that money shot of Lindsey Lohan latest nipple-slip and send it to the  Sun’s headquarters : they can now do it all from one device. 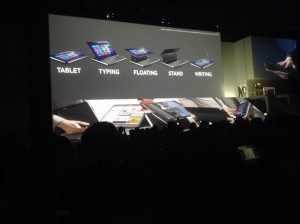 “The John Snow of Slabtops”

Samsung definitely has the time and the recourses to throw ideas around and see if they stick, that much is for certain. Their growing market penetration (and the fact people are dragging their feet in Cupertino) gives them the space and the money to do so. But when they unveiled their Samsung Ativ Q, our initial response was “Meh ?”. A 13 inch “Tablet” that folds its screen and keyboard into multiple kama-sutra like positions is nothing new. Dell tried this once and came up with the horrible “Inspiron Duo”. The specs of Samsungs Ativ Q did raise some eyebrows as it sported a higher resolution then most Retina Macbooks ( 3200 by 1800 on a 13 inch display) and apparently had an “outdoor friendly screen” as its brightness would supposedly outshine the sun. For those who have stumpy digits (Hello Mr Hulk ?) you could also operate the thing with your S-Pen (pronounced “arse-pen”). Where Samsung DID surprise us was with the fact that this thing booted two operating systems side by side. On the one hand it comes with Samsungs latest ‘mutation’ of Android, on the other hand it comes with a “Full Blown” copy of Windows 8 (and Samsung throws in a free copy of Office 2013 to boot). This does make it the “John Snow” of Samsungs presentation. This ‘Bastard Son’ was born out of Samsungs monogamous wedlock with Android. Instead of being short, stumpy and ugly .. it might be the one thing that can save us all from the wildlings of … Oh wait .. I should put down my copy of Game of Thrones RIGHT NOW.  What I want to say is : With “multiple” operating systems, AND the ability to run Android apps IN WINDOWS .. this thing might be a sliders dream.  As for pricing and power consumption : we do not know whats coming. Perhaps this thing needs chewing-gum-sized strips of raw plutonium to run over an hour at ‘full power’. As for Samsungs heralded 8 hours battery life ? We will see. 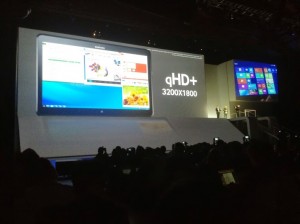 Overall there were some other 8 inch tablets, the Ativ Tab3,  running Windows 8 (full version) but their 64 gig drives and 2 gigs of ram will probably only please a few. Samsung took a stab at cross breeding this tablet with an iMac and came up with a pretty but wide-bezzeled “Ativ One 5” and also pushed out some interesting notebooks for people with fat and thinner wallets. But the “John Snow” of Slabtops .. was the highlight of the evening.

Does “Hulk Smash” work ?  Perhaps. The tricky thing with creating “crossover” devices is that our human minds do still think in patterns of one or the other. When C is the sum of A and B its gonna take us a while to get used to C… Until then we see ‘C’ as A+ or  B- ..  Are you any good at math ? Keep up ! ..  So smashing phones and camera’s together is not a guaranteed success right away, But hey … A couple of years ago “Hulk” smashed a computer and a phone together .. and now look at us. 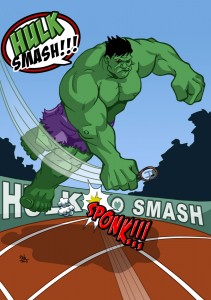 In the end the writing is on the wall : The lines between our devices is thinning. Laptops, Tablets, Phones, Camera’s, Desktops .. they are all starting to morph together. Wether you “undermine” a DSLR by turning it into a phone or “overpimp” an Android Slate by giving it Windows 8 Pro .. you are wading in murky depts.  Some of these mutations might die in childbirth, yet some of them might grow strong and redefine their very product name. Only time will tell. And time is money .. and money is something that Samsung has plenty to burn …

We will of course be offering up a full video coverage of this event in the upcoming week .. We just need to “Smash” it together.