Evernote, oh evernote, how I have come to love you. And to be annoyed by you. No linux Client, seriously?
Ah well, but there is everpad, which works reasonably and there is the website, which works reasonably well ‘as well’. But reasonably isn’t always good enough, now is it. And as a cross platform slider, even with an ever so slight Linux preference, you want the same experience everywhere. 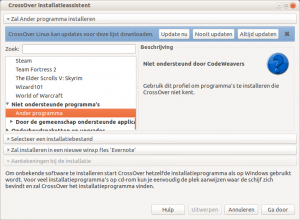 So, ever heard about PlayOnLinux  or Crossover? What they both do? They Wine!  🙂 PlayOnLinux does it for free, only on linux. And crossover is a paid application which runs on linux and on Osx.

Wine, is an application for linux helps you running Windows applications on linux without installing a full windows machine, be it virtual or not. So you will have a smaller footprint on your HDD. Wine is the hardcore, console driven, text file editing, parameters eating core of both applications. So if you are a really hardcore, text file editing  parameters eating kind of console guru (in which case you’d probably rather die than using any Microsoft software) you could just use Wine. But if you are a happy Linux Camper, not to hardcore into the console, loving your rig, but you just gotta have that ‘One application’, (even just because you can)  PlayOnLinux or Crossover can help you out. Big Time.

I used both to run Evernote on my system, and the latest installation was done in Crossover. The people at codeweavers every now and then give their software away for free and I jumped on the bandwagon, just to see how it ran. Well, I stuck with them so far, so they must be doing something good. 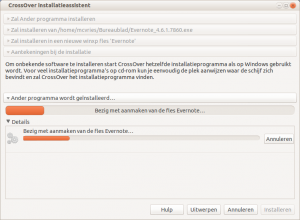 So how does this work? Download and install crossover from their site, and while you are at it, download the latest version Evernote. My setup uses 4.5.10.7427 at the time. An installed version of Crossover gives you some menu options, and one of them is ‘Install windows Software’. Hit that one. We are going straight to our goal here, so we choose to use an installer file of our own and we create a bottle which mimics aWindows XP machine. Crossover will prepare the bottle and it will install Evernote into that ‘Bottle’. Which are these bottles I talk about? Well, ever heard of sandboxing your applications? A bottle is a Sandbox. A self contained environment just for that application. So you can copy the whole application to another machine with Crossover and pick up where you left off. Crossover will make some menu items for you where you can start the Windows application so in my case, running Evernote was a painless experience. 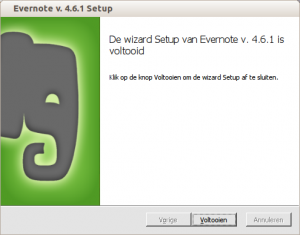 Just these things to consider : within Crossover or PlayOnLinux choose XP as a windows environment, and use Wine 1.4.1.

And after a while I took an MS office cd, edited my existing Evernote ‘Bottle’ and installed Word and Excel alongside Evernote. Opening the dreaded docx coworkers share with me went great, without any formatting issues. Don’t bite my head off, sometimes the easiest way takes some non open software.

McVries is an I.T. professional who tries to avoid the dreaded Vendor Lock In as much as possible by means off open source solutions. Hit him up on twitter @mcvries_ , GooglePlus or visit his blog on www.mcvries.nl

What applications are holding YOU back from making the switch .. and could Crossover be a solution ? Tell us in the Comments Section.