As I’m punching out this blogpost on my older but trusty HP Pavilion dm1, I’m somehow overpowered by a sense of nostalgia and … irony. I remember getting into computers years ago, starting out on machines like these (back in the days they were home built beige boxes) using a predecessor (or should I say forefather) of the operating system that is running today. The last couple of years I have swayed from that path of using a ‘Redmond Based’ operating system on my primary machines in favor of the one created in Cupertino. The last year or so I have even moved away from that one, to start using the ‘pengiun’ full time. For those of you baffled by my ramblings : I’m a slider. I move from operating system to operating system and use the one that works for me. From Android to Ios, from Windows to Osx to Linux … and today .. back to Windows again.

The new Windows 8 Metro interface was not something that stalked in quietly in the night. The press had seen this one coming and had been tooting their horns on how “different” it was to Windows 7. The Redmont company had had rough times. The ‘Vista disaster’ had left its mark and even though Windows 7 was a descent project, the flame of innovation was lost in Balmers ranks. Windows was going the way of the Blackberry … or were they ?

Windows 8 brought a unified ‘metro’ interface that was radically different then anything they had done before. Not only did they launch a version for the PC, there was also a unified interface for the mobile world and their own tablet device. Microsoft being Microsoft did make a simple strategy like this very complicated to explain and pretty soon you had Windows 8 Pro, RT, Phone and we even thought we would get an oreo-flavored version of the OS sometime later this years.

But never mind all that : Windows 8 is here and this week I decided to dive in deep and install it on one of my laptops. After poking it with a stick in a VM on my Linux machine, I was confident (or should I say ‘Daring’ ) enough to try out a full install. And I must say : I’m quite impressed with Windows 8. Because it is radically different then anything Microsoft has done the last couple of years. It is BOLD ! The Metro interface takes some getting used to, and everywhere I hear people spouting tips and tricks on how to get “passed” it and crawl back to the Start Menu .. but I say to you : Embrace it. Give it a try for a couple of days and give your human brain (that has been accustomed with the Start Button approach for years) a chance to adapt. Because even beyond the ‘in your face’ start menu the operating system preforms fast enough and lets you do what you want to do. So as a passionate Mac and Linux user I dare to say : I like Windows 8.

And now for me to tell you why :

Windows 8 has one specific quality that is very VERY important to an operating system. You hardly know its there. Once you are working in your application full screen (or in a window) you do not notice the operating system is there. When you NEED it, all you need to hit is the Windows button to bring up the menu , or poke the sides of your screen with your mouse. And the rest is business as usual. Using cross platform applications like Chrome, Firefox, Thunderbird don’t even give you a clue that there is in fact a ‘different’ os running under the hood then the Osx or Linux flavour of your choice.

So whats the deal then ?

Human kind is genetically designed to gang up on a certain individual and make fun of him. Microsoft-bashing is SO OLD , that its first instances are now the subject of historical re-enactments at county fairs. Its easy to bash on Microsoft .. We always did, so why not now. The problem with this approach (and the scuffing of anything that is ‘different’) is the fact that it is somewhere based on bias. And bias is a self-inflicted restriction of personal freedom. You decide to dislike something (or some-one) without getting to know it.

A lot of this bias is based on the fear for change. The uproar when Ubuntu decided to go for the Unity interface, has still not died down. The rage against Microsoft because of the Metro interface will surely echo into eternity. The reason for this ? We are afraid of change. We are the generation that is in the transition between the ‘Classic OS’ with the tiled windows (not Windows) and the start buttons. You can find the back in rock-paintings of the very first version of Xerox-OS through many versions of both Windows and Linux. But that ship has sailed. We are going to have to adapt and learn how to work with our computers differently. The age of the “visible” OS is over and with the advent of ‘full screen applications’ comes the clear message that the OS is but a means .. not a goal.

So put down your pitchforks and step away from the angry mob to take a good look at Windows 8. A product from a very ‘old’ company that has been bold enough to innovate and to change. To bring something to market that is not perfect (it has its flaws) , but DIFFERENT from the competition. And in times of economic crisis that takes balls. 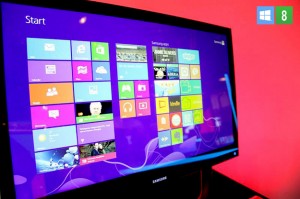 And before you decide to burn ME on the stake for my heretics .. let me round up and get out of here. Computers are about YOU. They are the enablers of your digital power. They are coated with the fine slime of an operating system that should facilitate the smooth interaction between you and your applications. You applications should be your tool set to interact with your Data .. and whatever you do with that data should be directly tied to whatever personal goal you have. Nowhere .. nowhere in this process should you hinder yourself by making an uninformed choice why you should not want to use X or Y. Computers are about YOU .. not about computers.

So let my slide back to another computer lying around the house. Whether that be my Macbook air running Ubuntu, My Macbook Pro running Mountain Lion. I might get a call on my LG Nexus 4 (running Android) or pick up my book where I left off on my iPad .. I don’t care .. an neither should you. Windowss 8 might be your thing, or not (you should at least try it) As for me it has one good quality of a good operating system : it is invisible. In the end I forget what device runs what OS .. in the end it does not matter anymore.

Pitchforks, angry mobs and stakes in the comment section 🙂