If you ever watched the movie Wargames (I am showing my age here) or remember the scene inside the control room of the Nebuchadnezzar and you found your geek heart-rate quickening at the sight of all those screens … then you know what I mean when I say : “One display is never enough”.

I remember the near fistfight scenario’s at the office where users would demand a dual-screen setup. They would vaguely think up scenario’s about the need to simultaneously run applications or compare data across the screen. The troglodyte rat-race that had prefaced this situation featured the urge to get “the biggest screen” in the office. Now there was a new kind of ‘hip’ in town .. the need to have TWO screens. Never mind if they needed it .. their neighbour had two .. so one screen was just not enough.

The domestic geek in the confounds of his own private dungeon is very much the same. ONE computer cannot be enough… you need SEVERAL machines. And since we are well on a roll on tilting the number of devices per user quota , lets add some tablets and smartphones to the mix .. shall we ?
So what you end up with is a complete over-connected bat cave with plenty of systems that you need to maintain. More screens then you can encompass, each displaying a separate part of your information streams (or each redundantly displaying the SAME information streams). Giant “waves” of notifications across all the different systems whenever you get a new reply on Twitter. Plenty of of keyboard-swapping and a dizzying amount of chair-swivelling. Yes : You have built a veritable mission control centre with enough machines to keep 5 people occupied, but you have a staff of one. 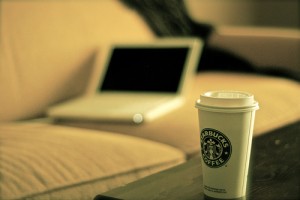 So what if we go back to simplicity ? Last week, I had to confine myself to our kitchen table downstairs so I could keep my wife (who had the flu) company as she was sleeping on the couch. My “Mission Control Centre” sat unmanned upstairs. The only thing I had was my laptop, a notebook riser, an external keyboard and mouse .. and a pair of earphones. My geek universe shrunk to ONE 13 INCH screen. Can you imagine the horror ?

So was it horrible ? Did I suffer information deprivation ? Did my fingers grasp the empty air where otherwise secondary (or tertiary) keyboards used to be ? Initially the answer was : YES. It took me quite  to squeeze all of my workflows onto one machine/display but after a couple of hours I started to enjoy it. I  have to admit , my personal digital architecture ( the way I have organised my Cyber Lifestyle) highly favours “sliding” from OS to OS , from machine to machine so I seldom have data or workflows locked down to one specific machine. I could cope with using just ‘one machine’ for a short time, but would it last ?

To my own surprise I actually started enjoying it ! The “one machine” approach meant that I could  focus on what I was doing. The distractions were kept down to a minimum (Windows that I did not need simply remained closed) and notifications just came in ONCE on ONE system. When I closed down my email client, I did not get any mail notifications. I didn’t have to fight the urge to “check Twitter at a glance”. With fewer monitors and fewer systems I gained more focus then ever before.

On top of that, I got back some “intimacy” with my system. When there was a problem, or I needed to figure out how to do stuff , it was just on that ONE machine. It had been a long time since I experienced the feeling of having “one” computer that was “MY” computer and not just  “A” computer. This kind of “human-device” intimacy resulted in me taking extra good care of that machine. I tweaked it to my liking. It took me 25 minutes to find the right wallpaper and really ‘settle in’ on my machine,  instead of just ‘passing by’ and quickly rap on the keyboard before moving on. That one little computer became my ‘home’.

So I have learned something : More is not always better. I admit it is quite hard to do full screen video editing on a single 13 inch laptop but it does help you focus on the content. More machines means more maintenance, more distractions and more ‘distance’ from the machine. We loose not only the intimacy with “OUR computer”, we also lose the intimacy with the applications we have because we “bounce around” so much. We hop from phone to web interface, from mail client to tablet and loose any ‘deep knowledge’ of an OS or an application. We don’t seem to the time anymore, or better said : We don’t TAKE the time.

It felt refreshing to be back upstairs after a couple of days. Basking in the glow of all three 24inch displays, overlooking my digital horizon while leaning back with my hot cup of tea .. but somehow I missed my little excursion. Going back to the basics of one simple machine reminded me .. that sometimes less .. is so much more.