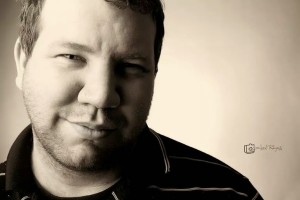 Until very recently this would have been a typically geeky post. For years I’ve been the kind of person who always has a laptop or two, often a tablet, and an untold number of USB thumb drives for various purposes stashed somewhere in my bag. Recently, however, that changed.

This week I sold my laptop. I won’t get into all the reasons why I parted ways with my daily companion, but suffice to say I’m making some adjustments to my computing habits and this was the first major step towards this particular technological goal.

My bag is very analogue these days. There’s some technology in there, to be sure, it would be very difficult to do my software-focused job without some of it. But I have learned over the past year that I prefer a bit more minimalist approach. I use the term advisedly because I know there are people out there far more minimalist than I am, but I have cut down on the number of machines I own and the amount of gear I carry around with me quite significantly. 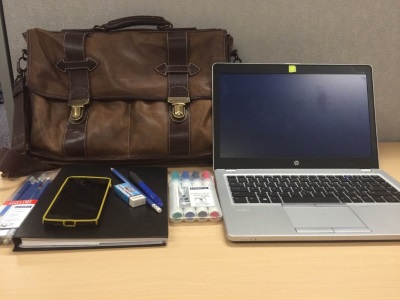 Work Laptop – Elitebook Folio 9470m
This is the machine supplied by my employer for my day-to-day work activities. Being a fairly large company we don’t have the freedom to select our own machines and have to go with what we’re given for the most part. In my case I have just had mine replaced with this new HP “ultrabook”. It’s a 13″ Core i5 laptop with 4GB of memory running Windows 7. It’s enough to get me through my day, but isn’t anything particularly special.

Since I spend about half my working days working from my home office I don’t have a permanent space in our building which necessitates me carrying around not only the laptop, but also the power supply. When I’m at home I have a good monitor, keyboard and mouse, but in the office I end up using the laptop keyboard a tiny little 17″ LCD screen and a stock little optical mouse. Suffice to say I prefer to work in my own office most of the time.

Work Phone – LG Nexus 5
I carry two phones, one for work and one for everything else. The work phone doesn’t get a ton of use, but it’s my only mobile method of checking my work calendar and my work email. The main reason for carrying two phones instead of one to rule them all is the restrictions required for the work phone. My employer’s device management software places some significant restrictions on the types of apps and data synchronization tools that can be installed on the phone. Lack of ability to have some pretty basic data-sharing tools like Dropbox makes using this as my primary phone a non-starter.

Personal Phone – iPhone 5s
I have just ended a year of going Android-only for my mobile phones. The Nexus 5 I just mentioned above was my personal phone and I had used a Samsung Galaxy S3 for work. When the S3 broke, I decided to split my mobile phone platform life and switch to an iPhone 5s for my personal phone. No slight against Android but I just felt like I wanted to go back to an iPhone after a year away from the Apple fold.

This is the phone that gets used for *everything* including all my social media and personal email. It’s basically my lifeline to the outside world. It’s also the last of the technology in my bag.

Notebook – BlueLine NotePro Hardcover
I go through these notebooks like crazy. I take them to every meeting, use them during every conference call and use them to jot notes, diagrams and whatever else may cross my mind throughout the day. Essentially the book is an outboard extension to my brain and a scratch pad/draft area for lots of things that will eventually end up as notes on my computer, emails, diagrams or any number of other things.

These books have a coiled binding that allows them to lay flat or fold the front cover in behind so that I can use it pretty well anywhere. As much as I love all my tech gear, there’s something simple about being able to pick up a writing stick and make notes appear on paper.

Pencils – Staedtler Norica HB Pencils
Yes. Pencils. HB pencils. Just like you used to use back in elementary school. They don’t run out of ink, they don’t smudge all over my hands, they write on any angle, and they’re pressure sensitive — I can get various shades of gray and black by varying pressure.

I’ve really liked having pencils in my bag for the past couple of years and while I do have a pen as well, I don’t know that I’ll go back to using a pen as my primary method of documenting ideas on paper.

Eraser – Papermate Speederase
I have this in my bag. But I don’t use it. Proof? It’s still in the plastic. Erasing slows down the process of documenting and notation. Paper is a transient, ephemeral platform for me, it need not be permanent. No sense wasting time with an eraser when a simple scribble will do.

Pen – Zebra Z-Grip Gel Pen
Once in a while I like to use a pen. Most often I only use it when I need to sign something (which is blessedly rare these days). Most of the time the person most likely to use the pen is my daughter. As least lately.

Whiteboard Pens – Staedtler Lumocolor Pens
I like these pens. I’ve had them for a few years and end up using them a couple of times a week when I get into a conference room with a whiteboard and all of the pens are either broken, dried out or just plain missing. I like these pens for a few reasons. They are fairly easy on the nose compared to other dry-erase markers I’ve used. So far they have always worked and never dried out on me. One other neat feature is that the box they come in converts into a stand-up shape so that you can park in on the table and have easy access to them. It’s totally a gimmick, but I like it.

The Bag – Leather Messenger Bag
The bag itself is a nice brown leather messenger bag by Roots (no idea what the model is). It has three large compartments inside, as well as a few smaller pockets on the front. Everything I need to transport fits very easily in the bag, and I’m even able to fit an extra laptop or an iPad plus a keyboard if I need to take them somewhere.

The only downside is that there’s no padded compartment for the laptop, so for some extra protection the laptop needs a sleeve (or sometimes just some paper in the bottom of the middle section to provide some drop protection (or protection from putting the bag down a bit too hard).

So that’s pretty much it. I’m sure the contents of my bag will change next week or next month if I decide to try out something new. Maybe I’ll find a new use for my iPad. Who knows? Ultimately the contents of our daily carry bags evolve as our needs and knowledge evolve. I’ve gotten some great ideas from the other guest bloggers this week and will definitely be adapting my workflow to incorporate some of these ideas. What will you adapt?