Looking back : an old repost from November 6th 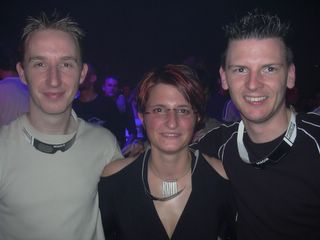 I found this article on tiestoworld.nl and thought I would 'bring it to mommy' I wrote it the day after the Tiesto Concert in Hasselt and is was on the old Knighsite website (and mirrored on Tiestoworld.) So for those of you who want to know what it was like back there … here is the story ( Fuming with jealousy at Swift and Zirbo who are going to see 'the lord in action' @ Disneyworld Paris in a few weeks)

After the construction of the immense Ethias Arena Hasselt was ready for a big event. And so it came. Tiësto's new concert MAGIC hit ground zero @ 22 hours local time at friday the sixth of November. Publicity was HUGE and a large turnout was to be expected. Rumours of 16 000 people attending where overshadowed by the actual number of 22 000 fans turning up to watch their idol. One day after my 30th birtday an omen was in the air. This was gonna be big… and boy… Was it ever ….

At about 22 hours Saskia and me beamed down to the Ethias Arena expecting total chaos. Previous events involving a large crowd at the 'grenslandhallen' had a bad reputation. From long lines at the tickets up to riots at the 'vestiare'. But none of it apperad to be the case. Parking for the thousands of attending fans had been covered thanx to shuttle busses and the Ethias arena was big enough to swallow the immense crown fast enough making it possible to walk just in. My second surprise was the size of the hall. There is no point of reference as for scale but.. you KNOW its big.With cool 3d goggles on stand by a giant screen in the middle of the hall was to be the pinnacle for the warmup. 3d videoprojections that where impressivly real made me notice that 3D TV has come a long way.

As the spacy video's meshed into tantalising recordings of DJ Tiësto virtually 'touching' the crown from the giant screen the crowd was at critical mass for the show of their lifetime. I thought I was going to listen to a 8 hour set of Tiesto just playing records.I was dead wrong. Tiësto's show was going to be MAGIC.

The show kicked of with a mindnumbing opening where I got to see Mr Verwest in real life for real the show came true to its name. Magic was magic ! Not only extatic in sounds but also in vision. Magicians preformed an act making Tiësto disappear and reappear behind his decks. A simple trick but the Ethias Arena was jumping with joy.

Giant screens kept us in touch with Tiësto's every move and the visual animations where spectacular. Allthough concentrated at the front of the Arena it immersed every dancer in an incredible sea of sounds, images and light. Pyrotechnics and INDOOR FIREWORKS would make Lazarus jump with joy.

As the hours went by acts where woven trough the continuüm of music. Djembe players playing live alongside Tiësto's raving rage made us all think of how short ago it was we where all in the cage as the primal rithems swept through our souls.

But it was going to get only better. Immersed in what seemed to be a different world 22 000 people beat their hearts to the bass sounds of Thijs Verwest. We where on track on the highway of melody. It was only going to get better.

Tiesto's Irish Light Crew and mysellf fraternised. ( And this atmosphere was living everywhere.) " Ein Reich ! Ein DJ " we chanted. And that is what is was. No more race, colour, nationality, rich, poor. 22 000 people having being enchanted by the same magic.

Following standard regulations we where (as always) surrounded by nice looking girls. 4 hours into the party we were not thinking about going home AT ALL

The combination of a Bulgarian choir singing LIVE with Tiesto's music moved me beyond what I had expected. Lingering thoughts about what my religion truely is had been answered. When I looked around, saw the people, heard the music and felt the enormous atmosphere I knew : THIS IS RELIGION. A religion of sound ! To whoever was not there it is hard to explain but when you feel a lump in your throat you KNOW you are having the time of your life.

(and I was heaving the time of my life). 6 hours into the party and not stopped dancing yet.

But it was still to come. Imagine a classical violist playing an electrical violin. When the sounds subside to a techno version of 'Air' by Bach this dude plays a fantastic techno tune ON HIS VIOLIN ! Downright AWE was all i could muster. Mouth and eyes wide open with amazement we could only be sweaped away in a tsunami of emotion as Tiësto joined in with the actual track. The violin player did not stop but went on ending in an climax playing his instrument like an electrical guitar. When the song stopped 22 000 people held their breath for a heartbeat. And exploded in an enormous cheer for a spectacle unheared. As I turned to Steven ( fellow partyer) we looked at eachother totaly blown away. "I have NEVER heared this before". This was enormous.

And Tijs kept the classics for the last. Love DID come again and in its tunes. Playing his classic LOVE COMES AGAIN the Ethias Arena must have produced a small earthquacke. Literaly EVERYBODY went into extaxy. The religious experience I mentioned before took on something epical. I had never seen this !.

It was 6 30 AM. Not a fiber in our body thought about leaving. With hard romping beats ripping trough the crowd that despite the early hour was still plenty Tiesto made us explode once again.

And with Deliriums SILENCE as the last record we said goodbey to Tijs Verwest with an enormous applause. This man was and is our hero, the God of our religion, the fuse that set us alight and the true magician behind Tiësto's MAGIC. More on : http://users.edpnet.be/KEV172657/