IT is changing, dramatically so. With the advent of total ubiquity on smartphones and tablets among the general population, the rise of the connected fridge and the smart scale that loves to tweet how fat you are .. the “classic computer paradigm” is slowly changing. Our devices are becoming dumber and dumber and both our data and our services are slowly but surely evaporating into the cloud.

And still I insist on running some of those servers and services myself. “Why ? “ you ask with raised eyebrows as you randomly upload a selfie to an unknown service from an unknown company. As the file travels towards its mistic location where it will be stored forever, it sheds unwanted complication like “your intellectual property” and any notion of privacy. It’s a cloud service … so it should always work for free, always .. So why run your own server ? 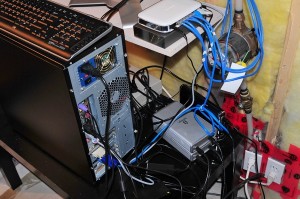 For one : Tinkering with computers and running your own servers and services is FUN. It stems from the day that computers were built to tinker with and where a combination of a piece of software, a network connection, a spare computer and 3 pots of dark coffee would get you your very first self-hosted webserver. Tinkering around with software and systems and making that very first “connection” to your very own server .. is just plain FUN.

The chance to learn and understand WHY things work.

The beauty about setting up and running your own servers is that you get a very enlightening insight into how and why things work. It is something you probably never think about when you “check in’ as mayor of the porta-potty around the corder where you work. What data is envolved, how does it get there, who keeps track of it, how does it show up on my mobile device .. what magic oomph loom pa’s need to hold hands and sing koomba-yah in order for all of it to work. You can rest assured that the wonders of trail and error when setting up your own service will teach you a great many deal about why things work. (By showing you over and over how things DON”T work.)

The notion of control.

Every single time Facebook changes its UI, the internet moans under the weight of millions voicing their complaints on how they want “The old Facebook” back. What many people continue to forget is that, when it comes to “free cloud services” .. you aren’t their client , you are their product. They make money by bouncing adds of your screen or selling your personal information and interactions to some very very clever marketeers. If the “free cloud service” is no longer profitable they can either start to charge you money or go out of business altogether. When they decide its time to bring in a feature that would make Bonzi Buddy* appear as your best friend (* check your internet cultural history you noobies) , you have ZERO control.

Privacy is a buzzword these days so lets not pretend that the files you store on dropbox contain the secret plans for an orbital death ray satellite. I’m not worried about government snoops sniffing my files, as long as they have due cause to do so. I’m more worried about these so-called ‘free services” selling my data (and my content) to whoever they want to. It might be in their “EULA’s”, but nobody reads those anyway.

So I love to run my self hosted version of Dropbox using the Bittorrent protocol. Its fun to set up, there are no data limits, nobody is snooping my files (that I know of) and I am in total and complete control of what is going on.

Ok , I have to admit, if the tech goes POOP .. it goes POOP and I am the one to fix it. There is not tech support , there is no hotline to call ( Well , there is , but since you will be calling yourself you will get a busy tone) It does mean that you might have to spend many an hour repairing an unforeseen issue. But think of it this way .. every sigh of frustration is a pebble on the road of knowledge (mostly knowledge on how NOT to do things).

Thus I embrace the possibility of running my own servers; not because i HAVE to.. but because I still can.