One of the things I fondly remember from my childhood are those cool sci-fi shows where the characters got to communicate with each other via their wristband-communicators. Whether it was David Hassellhoff calling his talking car in Knightrider or the crew of the Liberator communicating with their ship in Blakes 7 .. I thought it was the most awesome thing ! How cool would it be if you could make a call .. with your watch ?

A couple of weeks ago I got that chance. Samsung sent us a copy of their new “Gear S” smartwatch. Having owned it successor, the “Gear 1” I was familiar with Samsung’s approach to smartwatch technology. The “Gear 1” was pretty cool to use for notifications or even updating your calendar by using your voice .. but the “Gear S” had one more trick up its sleeve. It didn’t require to be paired with a phone at all. This was a stand-alone-all-on-its-own-wrist phone. Of course we had to try it out. 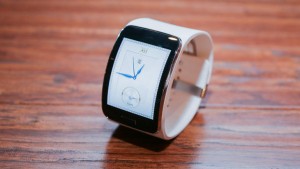 “A prop from Minority report.”

Compared to the ‘First gear’ , the ‘Second Gear’ in Samsungs smartwatch race (#pun intented) looks like it is a prop from ‘Minority Report’.  The watch/phone  has  very futuristic design with a curved 2 inch Amoled display in a white plastic casing. The wrist strap IS adjustable for the more delicate wrists, but the general curvature of the actual smartwatch is of course static.  The Gear S comes with all the bells and whistles a regular smartwatch has (Bluetooth, Onboard camera, speaker, microphone) but adds a heartrate monitor, a barometer (yes !) a UV-light sensor (ok ?) and a compass to the mix. But in order to stand on its own (without a phone) it also comes with Wifi and 3G. The dual core 1 ghz processor,4 gigs of internal storage and 512 megs of ram make this Samsungs first actual “phone” running the Tizen operating system.

“Please use a companion device to install this stand alone device”

First impressions. We were quite impressed taking the Gear S out of the box. The bright white model we got immediately transfixed the female population of the Knightwise.com headquarters but it was the screen that both sexes agreed on as being the real eye-catcher. So it was time to boot up this ‘stand alone’ smartwatch and after 5 seconds we bumped into one major disappointment. “Please connect to Gear manager to setup” was the first thing we read on this future proof wristwatch. In order to setup a device that touts you can use as a ‘phone’ without needing a phone .. you need to connect it to .. a phone (a SAMSUNG phone). So for those of you that don’t HAVE a smartphone or don’t have a SAMSUNG smartphone , setting up the Gear S is not possible. MAJOR disappointment ! We managed to get trough this initial hurdle but it was not the last time the Gear S screamed for a brand-like companion. To install additional apps we also needed the Gear manager. Bummer 🙁

Aside from this initial discrepancy (A stand alone device needing a phone to become fully operational), working with the Gear S was quite pleasant. The display is pretty, the interface does not lag (perhaps its because its running Tizen and not Touchwizz) and reading your notifications is way cooler on the Gear S then on the other Gear smartwatches due to the higher  screen resolution. But lets be honest : A 2 inch screen is not something you use to surf the web or type out long emails (although with the Gear S you could theoretically do just that) Samsung’s voice recognition software is there to help you out with that but it comes up a little short compared to the Google voice recognition service. Still it was able to assist us in ‘making the call’.

Calling our mom from our smartwatch was not as futuristic as we thought it would be. Aside from the stares we got from people around us (I was doing this in a coffee shop where the average age is 98) you don’t have a very ‘discrete’ phone-call (The other party is on speakerphone). So when mom asked me ‘Why I don’t visit her more often” I got a lot of judgmental stares from the grannies around me . I wished I could have summoned my talking car … but we aren’t quite there yet.

Conclusion : The Gear S is a great first failed attempt at a stand-alone smartwatch. First of all : The stand alone part : If you need another Samsung device to setup your stand-alone Samsung watch somebody didn’t think things through. Second : Although bright, crisp and lag-less : The screen is just too small to type up emails and surf the web. If voice-control fails you (for example you want to send a text message in Dutch) and you have to use the keyboard .. your GRANNY will get out more words per minute on her Nokia 3310.  And finally: WE aren’t quite ready yet. Lets face it, we only just got used to not staring at people who call handsfree while walking down the street. (They sometimes hold their phones in front of them, just to show people they aren’t nuts) This makes calling people from your wristwatch just a little weird (if you are not David Hasselhoff), at least for now.

However : When you are looking for a top of the line smartwatch to accompany your Samsung smartPHONE , don’t go for the Gear 2, the Gear fit or the Gear Neo : Go for this one. Paired with an actual phone it will make a great ‘companion’ device with a decent screen, a fast processor and awesome looks. At 399 euro’s it IS a bit hefty in price but if this kind of swag is your thing : Go for it.