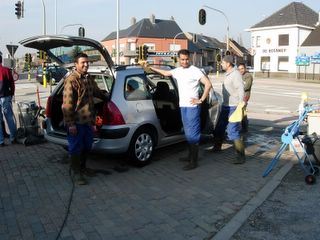 Yesterday afternoon proved to be a fun episode in the week. Driving from work to school i stopped at a local Car wash not far from Geel. I had seen these dudes before , 4 or 5 whacky guyz that wash your car for 15 euro's (inside and outside ! ! ) As you know I'm lazy , and the 307SW was not the modern example of a clean car (Soot and salt and dirt all over). So i pulled over and decided let these guyz do their worst. And Damn, they where GOOD ! 'Just like new !' the guy calls out to me. And after ripping into the car like 5 Borgs on speed go at a starfleet shuttlecraft I barely recognized the 307. It was spot clean ! Its like driving a whole new car ! I mentioned the blogg, pulled out my digital camera and made the picture you see above. They where Super friendly these guys and I recommend everybody to stop on by and have these guys attack your dirty ride !

After that it was of to Leuven. Took my lunch break on the stairs of the square next to the Tiensevest and with the soothing sounds of www.spacemusic.nl I checked out the fine looking female students and in general watched the world go by. After tinkering with another podcast-experiment it was of to school.

Got home pretty early that night to find Saskia still up 🙂 We went to bed early and ended up chatting and teasing each other. ( According to Saskia , people might think that I am gay because i'm a 'real man' and no silly macho) I've been pondering that statement for a few hours now .. but am not getting any wiser (no comments on this Mr Swift , just shut up) But Saskia did mean it as a compliment.. so.. there you go.

The whole ASTRA debacle is over, I ordered my company car today.. and let you know what it is real soon .. its a surprise.

Last but not least : Got elected for the I-city project in Hasselt (more about that soon) and found a feed script that might just do the trick and parse this blog into the knightwise.com site