I'm one of the last people who likes to walk in the blue Microsoft line. Its not that i'm anti MS, I just think Steve Balmer in all his sweating glory foaming at the mouth while screaming 'Developers', looks like a  walking EVIL version of Jaba the Hut. ( And let me point out : Evil version , Cause the Mighty Jabba is pretty cool). One of the things that bugs the crap out of me is when I "need' to walk in the blue line. I need to navigate my open-source-linux-mac-minded brain through the illogical reality that is the Microsoft Dominated world.

And so people send powerpoint presentations, create .doc files, and shower me in .wmv streams. And thanks to more then one year of "switching" experience, where I completely changed every computer in our house from Windows to Mac or an open source variant of Linux. Using operating systems like Ubuntu, Mac OS, but also free open source alternatives to most software like The Giimp, Neo-Office, Adium, Gaim, Skype and many many more.

But as much as you want to change the world , you can only start with yourself. So i'm stuck in a blue lined world where a lot of the people I know are using : MSN MESSENGER. Yes sure , it can be condemmed as the wire of the noobies but .. still . I don't hang out with geeks ALL the time. And the other 'normal' people just use msn.

Gone are the day of ICQ (THOSE where the days !), now everyone is on MSN. This program has evolved of being just another chat client to some kind of orgasmic over-pimped  version of a lovechild between Myspace and a box of Play Doh . They call it : MSN  LIVE. Populated by idiotic emoticons, flash animations and all kinds of horrible graphical extra's. Top it all off with some insane activex controls that alow people to shake your screen and you have a hackers ice cream sundae ! Needless to say . I despise having to USE msn even more then MSN itsself. 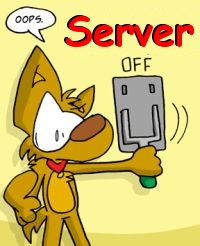 And not because its Microsoft. No , I hate the program because its a carcrash between Ali G and a drag queen. But I hate Microsoft for refusing to open up the one vital component that is a switchers dream : MSN Webcam support. Untill now the only reliable and fast way to set up a connectoin between two computers running the msn messenger protocol , is using MSN Messenger. If you are on LInux  ? Tough luck, If you're on Mac, Tough luck. The only way to get it working properly is by using their lame excuse for a peace of software. Before ANYONE screams "Mercury" as an open source Webcam alternative for chatting to MSN Messenger users from a REAL computer, think again buddies, Mercury is a good stab at it .. nothing more.

Yet today these troubles are far from my mind, because Msn Messenger is DOWN , and it looks like its global.  " Service temporarely unavaiilable' says the msn messenger website. And the social repercussions do seem to be quite farreaching. My MSN list (I use Adium) is populated but nobody is talking. Reason ? Somehow msn users are unable to send any messages to eachother. I'm experiencing not only a  new social plain of existence ( I have no one talking to me) but a mental "maré tranquilatis" as I can work away unbothered. Surely MSN will be back in a bitt and the catter can commence … I thought this small moment of instant messaging repose, was something worth mentioning.