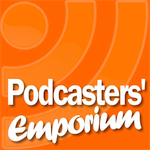 Guest spot on Podcasters Emporium 26 “Recording Skype on a Mac” This week I was asked to sit in ‘the hot seat’ on “Podcasters Emporium”. A podcast By podcasters (duh!) for podcasters or podcasting enthousiasts ABOUT podcasting. I got to spill the beans about my own podcasting history, what gear I use to record and how i use Callrecorder to record Skype interviews on the mac. James Williams and Dave Gray make up the exellent team of hosts on this podcast. Highly recommended for anyone who wants to get into podcasting or learn more about it : Podcasters Emporium.

Guest spot on the Tech45.eu Panel at “Macbeurs 2010“. Recently I was asked by the people of the TECH45.EU podcast to sit in on a live panel, hosted at the annual “Macbeurs” (mini mac-expo) in Genk (A town nearby). This great 1 hour panel with several awesome co-hosts talks about Apple mobile devices, the App store and about half way in you can hear me nearly starting a riot by mentioning “Android” as an “alternative platform” when you think about purchasing an Iphone. A great podcast but BEFORE YOU LISTEN … Make sure you speak some Dutch .. Cause it is all done in our “native tongue”. Want to hear “the Knight” in his “Klingon sounding Dutch .. ?” Go right ahead.

This week on the knightcast  we take a tour on the show flow floor of a local “mini mac-expo” “Macbeurs 2010. We talk to a company that fixes your Ipod when you drop it on the floor (or worse, in the toilet), Look at a cool system to prevent your ipad from getting stolen (or destroyed by sticky toddlerhands) and speak to Belgiums number 1 geek-Phoneprovider. After sitting in on a Dutch podcasting panel hosted by Tech45 we round up with some more interviews featuring the Dutch Apple Girls AND with a company that turns your Mac into a Penny Arcade machine. Plenty of stuff to listen to in KC0046 “Mini Mac expo in Genk”.

Guest Spot on the Aussie Geek Podcast nr 40 : “Four Score and Counting”.  Every 2 weeks I sit in as a regular co-host on the Aussiegeek podcast. A podcast featuring a Canadian, an Australian and a Belgian geek (me) who talk about the latest news in technology, rave about new applications, websites and services and have friendly (but not always family safe) banter. If you want to tune in feel free to listen to the episode. Visit the AGP Website for more information and the shownotes or subscribe to the AUSSIE GEEK PODCAST FEED below.

This week on the Knightcast podcast we ask ourselves the question : Who needs dual booting anyway. Triggered by a geek-thriller story about a 4 day old macbook air dying from mainboard failure we take a look at Dual booting versus the use of virtual machine. Listen in and learn the pro’s and the cons about dual booting versus virtual machines and get some tips on virtual machine software and uses for those “virtual operating systems” on your computer. Become a cross platform slider and move from Phisical OS to Virtual OS as we suggest some interesting uses for your Virtual machines you probably never thought of. All that and more in KC 0045.

Join “Operation B.E.L.G.I.U.M” and drop us a comment in the Itunes store.

As an added Bonus for the KWTV Episode 0018 ‘Talking Phones with Sigrid’ we are releasing the AUDIO from that interview in a separate file. Note that this episode is NOT in the feed and can only be downloaded manually OR you can use the embedded player to listen in. Enjoy the audio version of this screencast with ENHANCED AUDIO so the volumes of both Sigrids and my voice have been nicely leveled out.

What can I say : i’m a digital pack rat. I seldom, well actually NEVER leave the house without some (or multiple) snippets of technology strapped to my person. This can vary from a fully fledged laptopbag with a ” full on ” notebook, to the absolute minimum of my cellphone, a Samsung Galaxy S in my back pocket. Every time we go out the door, I frantically scrounge around for my tech-appendages while pondering the ultimate question : Am I not forgetting anything ?

Because my cyber friends, you can rest assured : There is a solemn wisdom which has been proven over tine : The one gadget you DON’T carry , is the one gadget you WILL need. Complaints from my better half resounding ‘Are you SURE you need all that with you ? Do you HAVE to carry THAT around ? ” only form a slight majority to the statement ” you packed ALL THAT and you DON’T have X with you ? ”  It is the embodiment of the “gadget paradigm”.

Choosing the correct gadget before you leave is of course a delicate task. Many things need to be taken in to consideration , like for example WHERE are we going ( Visiting the in laws vs walking in the fields) how LONG are we going to be gone ? What CAN i carry around ? Is it SAFE to carry around my Macbook Pro between scores of over-glucose’d toddlers armed with crayons and giant magnets ?

The outcome of such an internal debate can swing both ways. On occasions I have become this over zealous tech-bag-lady, shlepping around ipads, cellphones, camera’s and enough gear to run a load balancing data center for Google, should the need arrive. In other cases I went for a discrete low-tech but horribly “underpowered” setup that left me unable to digitally function. This with the sad result that I was forced to read a crummy magazine in the doctors office instead of playing angry birds.

Luckily the evolution of more portable, yet more powerful devices like the Netbook and the Ipad, meant that the “techno-shlepper” inside me could at least pop some gear into a bag that did not scream “I’m a laptop bag : MUG ME” whenever i walked down the street. The social adoption of “the manbag” meant that my EEEpc netbook could be “whipped out” at any occasion, without arousing suspicion that i was a closet geek instead of a ” sharp dressed young man “. However : Compact devices implement “compact bags” And the latter are the protagonists of “little space to carry extra’s”

Thus the danger of ” not packing the one gadget you need ” rears its ugly head again. The solution ? Think smart !  I will elaborate.

Asses connectivity.  Lets say you DO pack the portable equivalent of your own Cray-supercomputer only to find that you lack a 2 foot Ethernet cable when arriving at your mobile destination ! That BUURRNS ! Without any doubt your internet depraved brains will have you convulsing with frustration in no time. So always make sure that you asses what kind of connectivity you NEED and what kind of connectivity you might find while venturing out. A 3g Dongle (or tethered smartphone) is good for those ‘out and about’ scenario’s, but sometimes 20 feet of Ethernet cable and a small 5 ports switch swung into the boot of your car might also save you on more then one occasion. Again : Don’t “over-pack” but make sure you don’t forget that small piece of Cable (or wifi adapter) that could mean the difference between watching streaming video or playing solitaire offline.

Asses the hazards. The one thing you don’t want to do is to slap down a 17 inch laptop on a coffee table during a toddler party. The chance that the strategically placed cups filled with lethal sodapop and the uncontrolled movements of the little hobbits could result in catastrophe is very real. Always take into account the ‘dangers’ for you and your gear before venturing out. From damp laptopbags due to heavy rain to “possible theft of beloved gadget” due to the inability to store your gear safely while on location .. its always a risk. If the risk of damaging or loosing your gear outweighs the absolute need to take them along .. leave them at home. Better to miss your Macbook air while it sits safely at home, then to have it in the hands of a laptop-thief. Also make sure you always pack your gear in a good, fitting bag (or carry case) with plenty of padding and protection. And make it discrete. Big laptop bags marked “DELL” are a simple target for thieves or muggers. Carry your gear in discrete style.  ( and strapping your phone to your belt is soooo 90’s).

Having those pointers in the back of your head will make you consciously asses the gear you’ll pack on your next outage. Be however very aware that you still might end up forgetting that one piece of kit you really need. But in those cases you are allowed to slip into “analogue mode” and “read a book” or even “talk to other people” for a change. We won’t hold it against you … 🙂 This time …

We go on a quest to find the white raven and come back with the rarest of them all : A Flemish, English speaking, Female video blogger / writer that  writes about Mobile phones. In a one hour video interview we talk about who IS Sigrid Dufraimont, her training and career and her internship in the United States. We touch on topics like journalism and clashing cultures between Belgium and the US. And of course we cut into the meat of things with our discussions on mobile phones. What is her favorite platform, what phone does she use right now and what will mobile phones look like in the future. As an added bonus we show you around in one of the coolest bookstores in Maastricht, but for that you’ll just have to watch the interview.

ime for a little “offline time” as we give you a taste of the Knightwise.com Newsletter.Lets give all of our E-book and Ipad reading geeks a little “reading material” for those precious 5 minutes a day they loose internet connectivity and are forced to live “Offline”. Call it a blogpost inside a pdf , call it a newsletter, call it a piece of tree waiting to be printed : We call it “Knightwriter”. A little reading material for when you have the time.

The Knightcast episode 44is the “Audio Coverage” of our Visit to F.A.C.T.S Ghent 2010. As we wander the show floor of the biggest Sci-Fi and anime convention in Belgium, we talk to all kinds of interesting fans and booth-holders and bring you a selection of these interviews. Video footage will follow soon so stay tuned for that too. Until then enjoy the ‘audio tour” of F.A.C.T.S Ghent 2010.