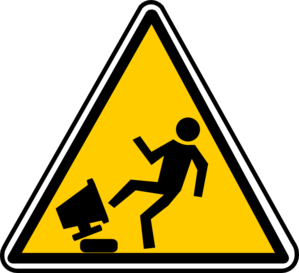 “Ghah !” .. An cry of frustration escapes my throat as I shove my mouse and keyboard away from me with an intensity that would make a Klingon blush. I sigh, push my chair backwards and walk away from my computer after its operating system has once again tested the very limits of my patience. We’ve all been there. That zone where we are at the peak of our productive or creative efforts and your computer decides it would be a good idea to go and mess with you a bit. For many years Windows was the main culprit in these cases. Leading to issues where charming innocent office secretaries would either burst into tears or swear like drunken pirates when there compuer “ate” their word document in a brilliant blue screen of death. Today however, not windows but OSX was the source of my frustration. This is odd. After switching from Windows to the mac (and to Linux) my Macs and their operating systems have been the pinnacle of my creative productivity for years. “If you want to get things done, Get a Mac” .. I would say. So why the Klingon exclamation this morning I hear you ask ? “Lion” i growl back at you … (as I sip my coffee and try to regain my composure and creative vibe. But to be honest , it will be at least an hour before me and my Feline nemesis will be on speaking terms again. I sulk in a corner, stroking my Ipad as I read through the funnies on Flipboard. “I hate Lion” … I grumble.

So why ? What on earth is wrong with Lion ? Most OSX upgrades have been eagerly awaited and appreciated at casa del knightwise. So why not Lion ?   I look for the right way to say this and give up. Here is the blunt version. “Its for dumb people”. Don’t gasp as if you are shocked by my exclamation. You know me better then that !. Lion IS for dumb people, or at least that is how it feels. Let me start by pointing out that Lion is not a ‘new and revolutionary’ OS. Lion is nothing more then a pimped up , dumb-down version of Snow leopard. Its ‘additions’ are just about as innovative and valuable then upgrading from windows 95 (v2) to Windows Millennium.  Puzzled ? Let me explain.

First of all : There is the ‘auto start’ function. Somehow somebody at apple thought it would be a good idea to “re-open” all of your open applications when you reboot. I fail to see why. I honestly do. The ONLY reason I “restart” my computer is to start off with a clean system. A fresh slate, a new start. After wrestling intensively with the digital world on the previous night and having a gazillion programs open, I like to “start anew” in the morning as I reboot my machine. But OOOH NO ! Somehow Apple thinks it would be more ‘convenient’ if I where to get ALL of that clutter opened up for me automatically. So instead of booting up and “doing something” I spend the first minute or 2 closing windows and applications just to get a look at my wallpaper and start fresh. One would say this “feature” (i call it a PITA) would be something you can switch off ?  But you can’t ! Why ? ? Is it not MY computer ? My Os  ? don’t I get to decide I would like to “start fresh” every morning ?

But once I get passed that and am finally in my digital Zen-zone I have to be super careful as I work. My trusty magic mouse has now become a digital minefield. Back in the day it was pretty cool to have a mouse without a scroll wheel (or without a crud-collection ever-jamming ball like the mighty mouse ) The little ‘touchpad’ on top of my magic mouse never jammed up. But ever since Lion came along, those little “strokes” can become the key to disaster. First of all Apple decided it would be nice to take “scrolling” into the mirror universe, where a ‘bearded spock’ gave them a piece of their minds. So now up (which has been ‘up’ for many years) is suddenly DOWN and vice versa. A fancy Apple sales guy gave a somewhat feasible explanation about this and now its called ‘natural scrolling’. Yeah. Like your face hitting my fist is more “natural punching” then the other way around.  But hey ! There is more. My middle finger is banned from the mouse forever. In its perpetual raised state (no pun intended ‘lion’) it does not DARE to touch the sensitive interface in fear of setting up another strange function like zooming, swiping or god knows what. These added functionalities triggered by ‘finger motions’ are Apple’s version of the secret handshake or something. Instead of just using my mouse, the critter has now become the digital surface on which I need to memorize the complete ‘apple sign language’ to access all the new features. Swipe left for this, three finger swipe for that , pinch for this, Triple-tap-snap-your-fingers-and-dance for that ..  Its like having to learn sign language ! But I must be a fracking retard ! Because Apple calls all of this ‘natural’. I frown and seriously question of Apple’s very definition of the word. Is it NATURAL that when i grab for my mouse and ‘accidentally’ touch it sideways, my entire desktop switches to a full screen ‘dashboard’ (another completely useless feature) ?  Is it ‘Natural’ that when I move my mouse sideways (and accidently stroke the surface sideways) my browser goes BACK a page  ? ( completely destroying the blogpost I had just entered into the web-form of my blog) ? I seriously doubt it. Yeah sure. You can turn SOME of that stuff off. But why aren’t all those fancies ‘opt in’ instead of ‘go figure how to opt out’. Call me old fashioned but i’m not a “stroking” and “gesturing” kind of guy. Nice productive features like expose have been killed off in favour of ‘mission control’ A deliriously stupid IOS menu has been added to the mix to make people feel ‘more at home’ after using a tablet … In short all the the productive tricks I had on my Snow leopard install are gone .. and some of them just won’t be coming back. Where I used to WORK with Snow Leopard, I feel like i’m FIGHTING Lion. In essence , The most appropriate finger gesture I would like to summarize my feelings towards Lion .. is NOT a multi fingered one. ( Lets call it an “angry bird” )

Ghah ! I say and walk over to my Linux laptop. Relieved by the fact that I am after all, a slider and can go from OS to OS.
So as I log into my Gnome2 desktop on my Linux mint distro, my hopes sink further as I browse through all the new features in the new Ubuntu and upcoming Mint distributions. My frustration with the Unity interface on Ubuntu, that drove me to Linux Mints classic Gnome2 interface.. are about to be rekindled. Progress demands me to make a choice between the Unity interface in the most recent Ubuntu release, or Gnome 3 in the upcoming Mint release. Development on the classic “Gnome 2 ” interface will cease and I”ll be forced in the direction of “progress”.

And even in Linux that “progress” is a less customizable, more “tablet” oriented interface like Gnome3 or Unity. A lifehacker article talking about their pro’s and cons add on the sad conclusion that Gnome 3 is “less bad” then Unity. “Less bad”. after 15 years using computers I’ll need to choose for the “less bad” option. And all of that because all of the Desktop OS manufacturers are pointing all their noses towards tablet interfaces. Well guess what. My desktop is NOT a tablet. Please .. Stop treating it like one !

As I gulp down my coffee and ponder whether or not to return to my computer , i’m starting to wonder if i’m getting old ? Perhaps its that ? I have no idea. Have I become that Cobol programming bearded guy that snorts at new “Graphical User Interface” and praises the “good old days” of the command line ? Am I still somebody that wants to customize his Interface ? That likes things ‘the way they where ? “. The thought scares me. I’ll turn 37 in a few days. And without kids and w
ith a super geeky wife, I have the blessing of being an eternal kid. Collecting Star Wars figurines, going to Cons, Tinkering with computers .. I’ve never noticed that I was going towards 40.. Perhaps my mentality about all these new operating systems is a ‘sign of age’.   It makes me shudder.  But as with all things, one cannot stop progress. Just like Dolly Parton in 9 to 5 we will have to embrace progress with its rattling matrix printers and monochrome terminals .. We’ll just have to ‘swipe and pinch’ our way through.