On day 3 of guestblogger week we are very happy to welcome Belgian Blogger Matthew to the scene. As an editor of Belgiums biggest online gaming magazine and a gaming aficionado,  he gives you seven golden rules for ‘Gaming on a tight budget’

7 rules for gamers on a budget ( By Matthew )

As somebody who plays video games on a professional level, it’s easy for me to get all the latest games without any cost. But I have to admit: gaming is a expensive hobby. When you want to buy a title early after launch, you’ll be charged at least sixty euros. And then we aren’t even talking about the machines we’re playing on. But there are some tricks to game for not even half the price. And it’s completely legal! 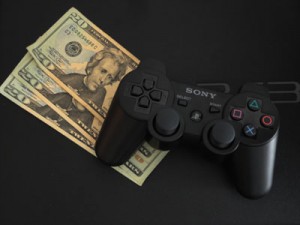 This is one of the basic rules. While I understand that you want to get your hands on that new title as soon as possible, it might not be a bad idea to wait a while. High prices are set for the early adopters and while some companies give you an advantage if you buy them early, like double experience weekends, free extras or a limited edition, it’s not always worth it. Actually, a lot of games drop at least twenty euros just a month post-release. That’s a 33 percent discount for just waiting. The latest Call of Duty instalment is for example available at 44 euros, while it launched at 64 in November, just three months later. And less than two months after Gran Turismo 6 went for sale for 69 euros, it’s now yours for less than 40 bucks. Waiting is good for you. And the longer you wait, the cheaper it gets. It’s something that you really need to think about. Is it worth to play that awesome title immediately? I sometimes buy my games over a year later at a 80 percent discount. Those games aren’t rubbish just because they’re a year old. Great games stay great. No matter what. So just wait a bit.

Most people like boxed copies. This way they are able to show off their collection. If you really need your game in a neat case, plastic wrapped and with a instruction booklet included, then you need to find the proper store. First of all you have to know that the game publishers will set a advised price, so that the stores know what is a good deal. But Sony for example sets those prices way too high for their exclusive titles, so a lot of stores will charge you 74 euros for new games. Specialised stores also tend to pick higher prices, because they will charge you there professionally and knowledge. Less known stores who sell about everything else, won’t lower their prices immediately because they have no clue what a game is worth and they just want to make profit. So look around. Don’t buy your games in a single store but compare prices and locate the best deals for your bucks.

You might know this already, but buying stuff online is usually cheaper. There are many online stores who sell video games and there’s a lot of competition between each other. So when you check the local online stores, you will definitely find games a lot cheaper. That’s usually because they don’t care about the advised prices set by the publishers and their marketing managers. They lower their prices to raise awareness and sell more stuff. Unlike retail stores, they do not buy their games through official distributors, so their stock prices are usually lower too. They do not need to pay rent for their shops or employees to sell. So they do not need those higher prices.

Tip 4: Why not choose to import?

So if buying online is cheaper, why not choose to use international exchange rates to your advantage? Games in England usually cost 40 pounds when they are just released. But that’s just a mere 48 euros, while here we will pay 60 or more for that same title. To be honest, you will be charged more for shipping, but some international online stores might have some great deals too. The British shop Game.co.uk for example sends everything internationally for just 2,95 GBP. Buy more than one game and you’re good to go. And they even have a points system. You will quickly collect enough points to lower the price sensibly. Importing doesn’t harm your consoles or games. Just make sure your system will run imported games. The PlayStation 3 and 4 both will play games from over the world and are not region locked. The Xbox 360 will play about half of the imported games, but there are a lot of compatibility charts available online. Also make sure your targeted game is available in your language! French and German stores usually sell games only in their languages so please take notice!

When you buy a boxed copy, you will not only be charged for the game, but also for everything that happened until you took the game off the shelves or the mailing service delivered it at your door. So you’ll pay for the employees, the distribution and the boxing. Buying a game digitally – without the packaging – is a lot cheaper. Every available console comes with a complimentary online store with great prices. You might save five to ten bucks on games, you can buy them at home and they will be downloaded to your system immediately. You will need a proper internet connection and some patience though until those games have been downloaded. Some games might take up to 40 GB, so don’t download games unless your internet provider doesn’t shut you down for downloading this much. On PC there are much more possibilities. Steam is a online store powered by the great people at Valve. They sell their games at a much lower prices then you would online, and they drop their prices reasonably quickly too.

Steam also has another advantage: they sometimes tend to throw everything at your face, just because they want to. About every three months they will organise the Steam Sales weeks. Nearly every recent title will have at least a 20 percent discount, with additional daily and hourly sales. It’s sometimes a gamble to choose the right time for buying a game during the Steam Sales, because the amount of discount can really change every few hours. Valve also has weekly and daily sales all over the year and sometimes has discounts on whole franchises, up to 70 percent. There are also other ways to buy games for less. Online stores like G2Play.net buys Steam keys in bulk and sells them with huge discounts, up to 60 percent off! Gamers with a console also have occasional discounts. There are weekly sales for both Xbox and PlayStation, so just check the online stores for the best deals, usually up to 70 percent. Even better are the Humble Bundles and Indie Royale Bundles, where you can buy four to eight games in one collection… and you can choose the price! If you want to, you can buy them for just one cent, but all the proceedings go to charity, so I tend to pay about 15 bucks. Then my conscience isn’t messing with me afterwards. And if you beat the average donation, you will receive more games. Ka-ching!

Last but not least, there’s also another option if you do not care about owning games but just having fun. Like Netflix and Spotify, it’s possible to stream video games. Some supercomputer in a datacenter will have the game set up for you, while you will only watch a video stream of it. You actually do not need a powerful PC to play those games. Even better: you can game in your tablet or smartphone. It’s just watching a movie really. OnLive is a great example where you can stream video games. They “rent” some games for just a few bucks a week, but you can also subscribe to the PlayPack for 9,99 a month and you can play over hundreds of games. While PlayStation is busy with their streaming service called PlayStation Now, they also have something called Instant Game Collection as a selling point for their PlayStation Plus subscription. If you pay 6,99 a month (or 49,99 a year), you will get access to about fifteen games each month, selected by the company. And if you think those games will suck, then think again. Most games have been nominated for Game of the Year before, so I can guarantee that this is a must-have subscription if you own a PlayStation 3, 4 or Vita. And even better: you will have a ten percent discount on the PlayStation Store too. The Xbox 360 has the Xbox Live Gold subscription which grants you two free games each month. While they are great too, they are usually older titles. And you can keep them, while you can’t on PlayStation. If you want to quit PlayStation Plus, you will lose your ability to play those downloaded games.